Motion sickness is the feeling that an individual gets once the motion sensed within the interior ear is different from the motion being visualized. This is considered as a common condition that typically manifests in some individuals who travel by train, car, boat or airplane. Some suffer from this condition if they ride on roller coasters or other comparable park rides in amusement parks. The condition initially starts as a feeling of uneasiness to sweating and eventually followed by nausea or vomiting.

Who are at risk for motion sickness?

Even though pregnant women and children are prone to motion sickness, anyone who travels is at risk for the condition. When traveling by boat, seasickness is regarded as a type of motion sickness. Other possible risk factors include the type of travel, lack of windows, poor ventilation and fear or anxiety of the individual about travel.

Signs and symptoms of motion sickness 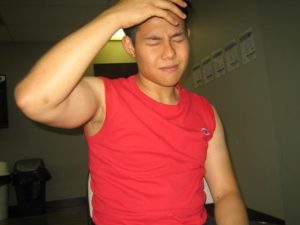 The symptoms of motion sickness starts with uneasiness and followed by cold sweats and dizziness.

The signs and symptoms of motion sickness typically start with a feeling of uneasiness that is followed by cold sweats and dizziness. In some cases, individuals can manifest pale skin and increased production of saliva accompanied with fatigue and headache. Nausea and vomiting can occur right after these initial symptoms.

When to consult a doctor?

In most cases, a doctor is not required if an individual is suffering from motion sickness unless he/she starts to develop dehydration due to continuous and troublesome vomiting. Once the motion has stopped, the symptoms will gradually decrease and eventually disappear.

Generally, motion sickness is diagnosed by your doctor with the health history of the individual and performing a physical examination. The symptoms are determined in order to make a diagnosis while laboratory tests are no longer required.

The treatment for motion sickness typically involves changes in the environment while travelling, over-the-counter medication and first aid measures at home. Additionally, some individuals respond well to relaxation techniques and biofeedback.

How to prevent motion sickness?